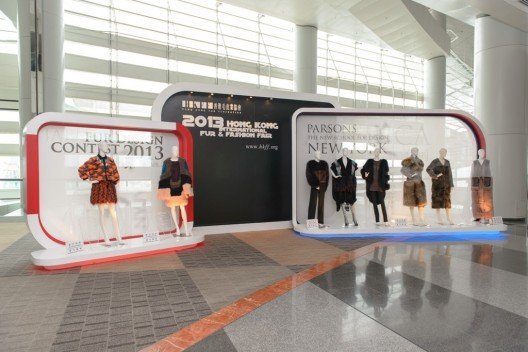 Regarded today as the world’s most important trade hub for upbeat fur designs, the Hong Kong International Fur & Fashion Fair, which ended on 28 February, was packed with buyers from around the world who were seeking fashionable fur — from lavish full-fur outfits to trendy fur-trimmed accessories.

The four-day fair attracted 7,963 local and international buyers, with attendance up by 1.2% and on-the-spot orders at similar levels to last year’s numbers. Visitors flocked in from all parts of the globe, with buyers from Russia, Korea and the Chinese mainland continuing to dominate.

“Obviously, the major buying power is from Russia and Korea, with the former looking for fashionably elegant as well as functional designs to combat their harsh winters, and the latter opting more playful and versatile ensembles,” said Mr. Wallace Wong, Chairman of the Hong Kong Fur Federation (HKFF).

“In the current economic climate, buyers from the US, Europe and Japan are inevitably more cautious about buying. Wholesalers and retailers who used to profit by selling in quantity are instead finding their profit margin in high-value-added products,” he continued.

“This further fortified the trend that buyers coming here are seeking fashionable fur items, and as such they are highly receptive to our designs. This shows that ‘Fur by Hong Kong’ is on the right track and that Hong Kong has truly become a Mecca in which buyers from around the world can look for voguish creations,” Mr. Wong enthused.

Meanwhile, new buyers were also coming from Turkey, Eastern Europe and Korea, thus showing encouraging feedback for the HKFF’s efforts over the past two years to promote its products in these markets.

Mr. Timothy Everest, Adviser to the HKFF and Managing Director of an international fur-trading company exhibiting at the Fair, noted that given the current slow economic recovery, and with the Fair being an export-oriented trade show, the bustling atmosphere at it was promising.

“Most importantly, the buyers are placing orders, with Russian and Korean buyers being the most significant. A major Korean fashion house has come with 22 staff, so they must be confident about what they can find here! There are as well smaller market-testing orders from Japan and the US, and in fact some European buyers bought before the Fair. These all underscore that Hong Kong is absolutely the world’s top one-stop shop for fur buyers,” he said.

This year, what has made buyers a little hesitant is the base price of fur, as the value of most skin types have risen rapidly over the last few months. Nevertheless, the prices of fur garments have not gone up by as much as the prices of the raw material, indicating that manufacturers are lowering their profit margins to secure more business. Price rises for garments, depending on the materials used, ranged from 5% to 35% over 2012 prices.

“Hong Kong furriers are also experienced in adjusting their manufacturing techniques to minimise fur consumption, so they can maintain a fashionable and luxurious look while keeping costs to a minimum. That is why Hong Kong remains the global fur hub because, using its flexibility, the industry here keeps evolving with the market,” noted Mr. Everest.

Attractive prices and distinctive quality have always been the trump cards of Hong Kong furriers and, with their resourcefulness in creating fashionable designs while controlling costs, this means that buyers can purchase more with the same budget while enjoying higher profitability.

“Indeed, the growing strength of fur as a component in fashion has been boosting the fur trade as well as the development of this Fair over the past ten years. With the textile and fashion sectors continuing to embrace fur, the fur business should be able to continue to thrive, even in poor economic times,” said Mr. Everest.

In line with this, demand for fur has been wide-ranging. At the top end, such furs as sable and mink, continue to prevail in the market, while Swakara, Karakul and Chinchilla have become new fashion motifs. Further, as a result of advances in processing technology, rabbit is very much sought after by global fashion buyers with Korean Fashion companies relatively more active in that arena. Notably, contrasting themes of lighter palette and bold colours, like bright red, blue and purple, are gaining popularity.

The Gala Show on the opening night showcased the abilities of Hong Kong’s furriers and was a resounding success that exceeded the audience’s expectations. During the evening, a breathtaking ballet presentation of the Russian Designers Love “Fur by Hong Kong” Collection — a first-time collaboration between renowned Russian designers and Hong Kong furriers — won appreciative applause from the more than 2,000 buyers from around the world.